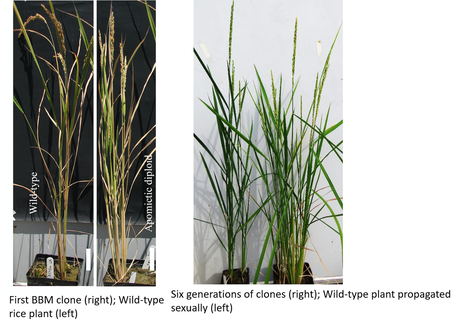 Hybrid seeds have allowed for significant increases in yield of crop plants; however, current agricultural practices depend on the constant procurement of new seed from producers as crossing of crop plants after the first generation can lead to decreases in yield. Understanding of how to develop synthetic apomixis in crop plants would allow beneficial hybrid combinations to be maintained in the next generation. This process could reduce the cost of hybrid seed or allow farmers to produce their own seed, reducing dependence on commercial seed producers.

The process for synthetic apomixis is dependent on two facets: the expression of Baby Boom within the egg cell and the introduction of Mitosis instead of Meiosis (MiMe). The Baby Boom (BBM) gene is responsible for overcoming the "fertilization block" in an egg cell. An egg cell won't replicate until it is fertilized by a sperm cell containing an expressed BBM gene. By expressing the BBM gene within the egg cell, this block is bypassed allowing the egg cell to replicate without fertilization. The introduction of Mitosis instead of Meiosis prevents the formation of haploid gametes by having gametes undergo mitosis instead of meiosis, keeping their number of chromosome copies consistent with somatic cells. These two traits allow for clonal propagation of a plant and thereby introduce synthetic apomixis into crop plants.

We have established a method for synthetic apomixis in rice and a detailed description of our discovery can be found here. We aim to increase the efficiency of current techniques to levels of commercial viability. Further, we are currently transferring the technology to tomato, a dicot, to demonstrate its viability across commercially produced angiosperm crops. ​​